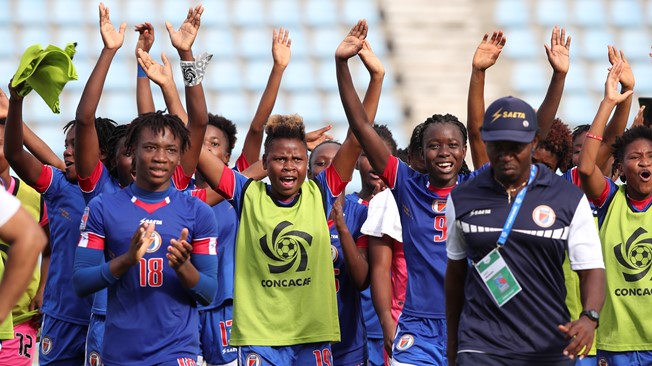 Haiti booked the final ticket from the CONCACAF region to qualify for the FIFA U-20 Women’s World Cup France 2018 with a 1-0 victory over Canada in the match for third place at the CONCACAF Women’s U-20 Championship in Couva, Trinidad and Tobago.
Sheryl Jeudy scored the game’s only goal in the 18th minute when she broke through Canada’s backline and latched on to the end of a superb through ball by captain Nerilia Mondesir before putting her laces through a fierce shot that ended up in the top corner.

Canada went in to the match as the favourites as they had defeated Haiti 4-0 in the group stage earlier in the tournament. However, Haiti put pressure on the Canadian defence which eventually led to Jeudy’s stunning strike, which was Haiti’s first ever goal against Canada in the history of the competition.

Canada were forced to take the initiative in the second half as they went in search of an equaliser, but Haiti goalkeeper Kerly Theus and Co stayed focussed and disciplined throughout the contest and kept Jordyn Huitema and the Canadian attack at bay.
Bureau de Communication de la FIFA (Zone CONCACAF)