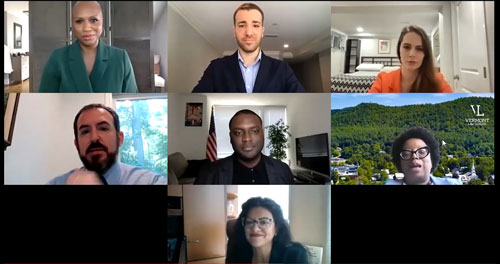 The Fossil Free Finance Act requires the Fed to acknowledge the existential threat climate change poses to the core tenants of its monetary policy and supervisory mandates and act to mitigate the financial stability threats of climate risk.

The lawmakers unveiled the legislation during a virtual press conference today.

“For too long, our federal government has looked the other way while our nation’s largest banks bankroll the dirtiest fossil fuel projects, exacerbating the climate crisis and setting us up for a massive, climate-induced economic collapse. That must change,” said Rep. Pressley. “It’s time for a financial system that is truly safe, sound, and just. One that recognizes the existential threat posed by climate change and takes aggressive action to save our economy, save our planet, and save lives. Our bill would do just that by requiring banks put an end to financing fossil fuel projects so we can meet our obligations under the Paris Climate Agreement and begin to confront this crisis head on. We can and must act before it’s too late.”

“The climate crisis poses an existential threat to every aspect of our society, including our economy and financial system,” said Congressman Jones. “But for too long, the Federal Reserve has failed to acknowledge climate change as the threat that it is. As climate disasters grow in frequency and intensity, we can no longer afford to stand by while big banks and other financial institutions invest trillions in the companies fueling the climate crisis. That’s why I’m proud to introduce the Fossil Free Finance Act, which will end the era of unmitigated emissions financing and ensure financial institutions do their part to address our climate crisis before it’s too late.”

“My residents deserve to breathe clean air,” said Congresswoman Tlaib. “For over a decade, Wayne County, Michigan has not met the Clean Air Act standards leaving us with high rates of asthma and respiratory illnesses. Our planet is burning. Over the last five years, financial institutions under the Federal Reserve’s supervision provided trillions in direct fossil fuel financing—and each new project brings us closer to the brink. The Federal Reserve’s role is not to surrender our planet to corporate polluters and shepherd our financial system to its destruction. The Federal Reserve’s role is to act. I am proud to join Rep. Jones and Rep. Pressley in introducing the Fossil Free Finance Act to require the Federal Reserve to finally address the risks climate change poses—and act at the scale this crisis demands.”

The Fossil Free Finance Act requires the Fed to mandate that all bank holding companies with more than $50 billion in assets and all nonbank SIFIs align their financing of greenhouse gas emissions and deforestation risk commodities with science-based emissions targets.

Specifically this bill mandates alignment with America’s obligations under the Paris Climate Agreement and the emissions financing reduction targets below:

“The Federal Reserve’s mandate includes protecting our communities and economy, and no longer propping up the culprits of climate chaos,” said Tracey Lewis, 350.org Senior Climate Finance Policy Analyst. “The historic Fossil Free Finance Act will blaze a trail in addressing the climate crisis at scale, and we thank climate champions Reps. Jones, Tlaib, and all co-sponsors of this Act for their visionary leadership. It’s time for a Fossil Free Federal Reserve that steers our economy away from investment in high-risk fossil fuels, incorporates climate risk across policies and lending, and prioritizes racial justice, including through full employment, ahead of COP26 this November.”

“Wall Street banks have made it clear that, without strong federal oversight and regulation, they plan to continue pouring money into the fossil fuels that are driving the climate crisis and pushing us toward another financial crisis,” said Sierra Club Fossil-Free Finance Campaign Manager Ben Cushing. “The Federal Reserve has long failed to use its existing tools to adequately rein in Wall Street’s risky fossil fuel investments. We applaud Representatives Jones, Tlaib, and Pressley for their leadership in pushing the Fed to do its job and protect our financial system from a climate-driven crash.”

“The Fossil Free Finance Act sends a powerful message that Congress won’t accept the Federal Reserve’s failure to do its job,” said Yevgeny Shrago, Policy Counsel at Public Citizen’s Climate Program. “The agency has tremendous power to protect the financial system from the effects of the climate crisis and to make sure it’s prepared for the coming clean energy transition. But just like with the 2008 financial crisis, the Fed is standing by as banks increase their risky bets on toxic assets. We applaud the sponsors of this bill for addressing this threat and directing the Fed to use the tools at its disposal to protect vulnerable communities from the financial impacts of the climate crisis, instead of safeguarding Wall Street profits.

“Regulators’ refusal to rein in Wall Street’s reckless risk-taking drove our economy off a cliff in 2008, and now, Wall Street’s climate-risky behavior could lead to an even bigger financial disaster if financial regulators don’t act,” said Evergreen Action Campaigns Director Lena Moffitt. “The Fed must fulfill its mandate to protect the American economy from a climate-fueled crash by using every available tool to limit climate risk in our market, but so far, it hasn’t done nearly enough. The Fossil Free Financing Act will bring us one step closer to sound financial regulation by ordering the Fed to do something it already has the authority to be doing—limiting how much greenhouse gas pollution a bank can finance, which is absolutely essential to reducing the climate risks that the financial sector, and all of us, face. We applaud Representatives Mondaire Jones, Ayanna Pressley, and Rashida Tlaib for their work on this important legislation, and we look forward to their continued work to protect working Americans from Wall Street’s short-sighted greed.

“Right now, a future free from the shackles of the fossil fuel industry is at stake because big banks continue to fund carbon polluters like Exxon, with no oversight or repercussions,” said Sunrise Movement Advocacy Director Lauren Maunus. “As banks make billions funding climate polluters, one in three Americans are facing a climate catastrophe right now. We must hold bad actors accountable by passing the Fossil Free Finance Act so we can finally put a stop to the endless funding of fossil fuel companies who pollute the air we breathe and the water we drink.”

“Addressing our global climate catastrophe requires an all-of-government, all-of-society approach that creatively pulls every available lever, and this legislation is a critical step in that direction,” said Katie Eder, Co-founder and Executive Director of Future Coalition. “By holding accountable the financial institutions underwriting the destruction of our planet, we can win a significant battle in the fight against climate change and show how collective action and climate justice can create a more sustainable economy that benefits everyone.”

Congresswoman Pressley, a member of the House Financial Services Committee, has been a vocal champion for consumers and ensuring that the U.S. banking system mitigates climate risk and works for everyday workers and families.

In June, she introduced the Greater Supervision in Banking Act, sweeping legislation that strengthens Congressional oversight of the country’s largest banks in order to protect consumers and prevent deceptive behavior from financial institutions. Specifically, the bill requires the banks to submit an annual public report including, among other things, information about their size and complexity, market activity, employee wages, diversity, climate risk and environmental harms, misconduct, use of forced arbitration, cybersecurity measures, and any enforcement or regulatory actions taken against them over the past year.

In April 2019, she questioned G-SIB CEOs about discriminatory lending practices during their first appearance before Congress in over a decade. She has also introduced the Payment Modernization Act – legislation requiring a more reasonable timeline for the Federal Reserve’s faster payments system and prioritizing consumer protection and wellbeing in the development process.

January 18, 2022 - Today, Tanisha Sullivan, an attorney and President of the Boston Branch of the NAACP, announced her candidacy for Secretary of...
Read more