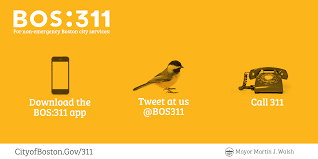 BOSTON – Tuesday, October 4, 2022 – Today, Mayor Michelle Wu announced the launch of a new version of the Boston 311 mobile app, aimed at improving user experience with expanded language access and redesigned features. The City of Boston 311, in partnership with the Department of Innovation and Technology and the Mayor’s Office of New Urban Mechanics, updated the app to offer increased language access capabilities and a user experience that is easier to navigate.

Boston 311 is a 24-hour service that works with various City departments to fulfill non-emergency service requests across the city including potholes, park maintenance, litter, and parking enforcement. Launched in 2009 as Citizens Connect, constituents can use the 311 hotline, mobile app, or online website to make a service request. Over the past 13 years, residents have submitted 1.1 million requests through the app. More than 50 percent of all the requests that constituents report today are through the Boston 311 mobile app.

“Tackling the big challenges our city faces starts with addressing the daily constituent issues that our residents experience across Boston’s neighborhoods,” said Mayor Michelle Wu. “The 311 app helps instantly alert City teams to neighborhood issues, and now that it is available in 11 languages, the app is more accessible and easy to use than ever before. I want to thank all the City departments who worked on this upgrade, and encourage all residents to use it where needed.”

“Our goal at the City of Boston is to put our residents’ needs at the forefront of our work, and to use their feedback and input to continually improve how we’re delivering services online,” said Julia Gutierrez, Chief Digital Officer for the City of Boston. “By providing our 311 app in the City’s top 11 languages, we hope to empower members of our communities who may not have otherwise interacted with the City.”

The updated app also incorporates design recommendations based on a six-week user research study, conducted by the Mayor’s Office of New Urban Mechanics. Interviewees gave feedback on the new design and features of Boston 311. Thirty-one residents from seven neighborhoods were interviewed; they represented seniors, immigrants, people with disabilities, youth, City employees, and native speakers of Boston’s most-spoken languages. By listening to resident feedback, the City was able to identify key usability concerns and create a more accessible app with app developer Connected Bits.

Additionally, users can now view the Status of City Services, a section that was previously only available on the Boston.gov homepage, in the above 11 languages. This upgrade builds on the City’s commitment to ensuring that all residents have equitable access to City services and information. Constituents can also now submit multiple photos as part of their service request.

The City’s Community Engagement Cabinet will host a 311 app training session on Friday, October 7 to help constituents learn how to use the app and what kinds of service requests it should be used for. At the training, which will be 3:00 p.m. – 6:00 p.m. at the Bruce Bolling Building, residents will be able to view 311 employees navigating the application on a projector and ask any questions they may have. Neighborhood liaisons in the Office of Neighborhood Services have already been testing the new 311 app while out in the community. Interpretation will be available in Spanish, Haitian Creole, Cape Verdean Creole, Vietnamese, and Cantonese.

“The 311 app is a crucial tool for connecting with our constituents, but it only works if residents know how to properly use it,” said Chief of Community Engagement Brianna Millor. “The expansion of language options in the app and the upcoming City-run training are critical to ensuring residents can effectively use City services. Together we can use the experiences of our constituents to fix problems and create a Boston for everyone.”

“The new update to the 311 app is wonderful and more user friendly,” said Annie Le, President of the board of Boston Little Saigon. “It also has resources that are available in one place with direct links. The language additions open the City’s resources and lines of communication to ALL of Boston’s residents, making it easier for residents to access information and communicate their needs. The app makes it faster and easier to communicate than calling 311, which may not have a translator available.”

Please note, the app should not be used to report emergencies, such as medical emergencies or criminal activities. To report an emergency please call 9-1-1.

For questions and more information visit boston.gov/311 or call 3-1-1. Residents are encouraged to share feedback about their experience with the app via the Boston 311 Feedback Survey.