Pressley, Warren, Healey Renew Calls for Biden to Cancel Up to $50,000 in Student Debt Through Executive Action 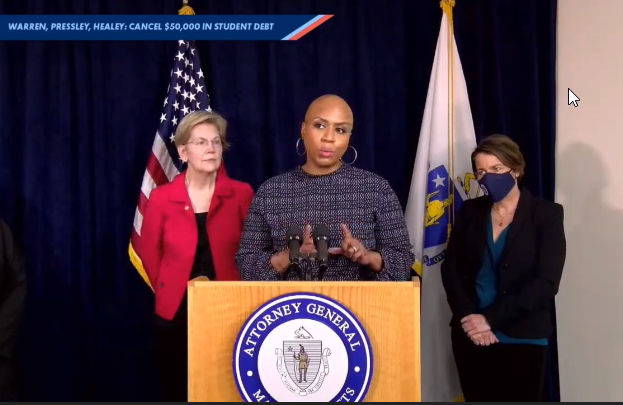 BOSTON – At a press conference this afternoon, Congresswoman Ayanna Pressley (MA-07), along with Senator Elizabeth Warren (D-MA) and Massachusetts Attorney General Maura Healey, called on President Biden to tackle the student loan debt crisis by using existing authority under the Higher Education Act to cancel up to $50,000 in student loan debt for Federal student loan borrowers.

Their press conference followed news that President Biden has asked Education Secretary Miguel Cardona to compile a memo on the president’s legal authorities to forgive student loan debt, including canceling up to $50,000. They were joined at the event by student borrower and Massachusetts constituent La’Kayla Carpenter.

Transcript: Rep. Pressley’s Remarks at Student Debt Cancellation Press Conference
REP. PRESSLEY: It’s always good to stand alongside my partners in good trouble, in doing the work of righting wrongs and centering the humanity of people in our efforts around consumer protection and social justice and so many other issues.

Today, we’re all here to call on President Biden to do right by the movement that elected him, and to use his executive authority to cancel $50,000 in federal student loan debt. We find ourselves in a moment of crisis. A public health and economic crisis, which has ravaged communities in the Massachusetts 7th and all across our Commonwealth.

A crisis of racial injustice and white supremacy, which continues to inflict hurt and harm and trauma on Black and brown, AAPI and Indigenous folks nationwide.
And a growing student debt crisis, which disproportionately impacts Black and brown borrowers.

So what this moment calls for is that we are bold, and that we are intentional in our policymaking at every level of government to confront these overlapping crises head on, and to set ourselves on a pathway to a just an equitable recovery.

Now, make no mistake. Very often on the issue of student debt, there has only been one narrative that people have heard. And that narrative does a deep disservice and injustice to the totality of burden and hurt and the psychological toll and impact of this debt.

The student debt crisis has always been a racial and economic justice issue. But for too long, that narrative has excluded Black and Latinx communities, when in fact, the student debt crisis has exacerbated deeply entrenched racial and economic inequities in our nation. Because of discriminatory policies like redlining, Black families were denied the ability to build generational wealth. 85% of Black students feel–or not even feel is a reality–they have no choice but to take out student loans, and they are five times more likely to default than their counterparts, than their other peers.

So these disparities, they didn’t just magically appear. They are the direct result of generations of precise, intentional policy violence, is how I would characterize it, which has systemically denied Black and Latinx families the opportunity to build wealth and forced our families to take on higher rates of student debt for a chance at the same degree as our white counterparts.

We have got to take bold action to address these inequities and disparities in our country. And we must use every tool available to provide our communities with the critical relief they so desperately need and deserve. Canceling student debt by executive action is one of the most effective ways President Biden can provide sweeping relief to millions of families, help reduce the racial wealth gap, and begin to build the groundwork for an equitable and just long term recovery.

We cannot afford to make the same mistakes of the past. During the 2008 financial crisis, lawmakers bailed out Wall Street and abandoned Black and brown communities who lost everything. And many have yet to recover.

So as we work to ensure an equitable recovery to the current crisis, we can’t simply tinker around the edges.

In the Commonwealth of Massachusetts alone, there are over 855,000 student borrowers, and they owe a total of $33.3 billion in student loan debt. Their average student loan balance is nearly $39,000. So that means in the midst of an unprecedented pandemic, which has brought unprecedented economic hardship, food insecurity, unemployment, families on the precipice of eviction, that people are still being expected to pay student loan debt that is the equivalent of a mortgage, in the midst of a global pandemic, when they’re having to fight and do every little thing just to remain safely housed in the midst of a global pandemic.

I represent the Massachusetts 7th Congressional District. This is a vibrant, diverse, dynamic district. It is one of the most unequal in our country. So while student debt cancellation would help communities nationwide, it would have an especially profound and transformative impact here in our Commonwealth.

As lawmakers, we have a responsibility to ensure that our long term recovery efforts leave no community behind. And that’s why we’re all here today. This is about investing in the people. That’s what student debt cancellation is. It’s good economic policy. It’s an investment in the people, particular Black and Brown families.
And that’s why Senator Warren and I, in partnership with Senate Majority Leader Schumer and our other colleagues, re-introduced our resolution in Congress that calls on President Biden to cancel up to $50,000 in student loan debt and lays out a pathway for him to do so. Our resolution has a record level of support across both chambers of Congress and is supported by over 325 grassroots organizations.

The coalition behind student debt cancellation is the very same coalition that elected Joe Biden and Kamala Harris. And it is a powerful coalition.

With the stroke of a pen, President Biden can provide direct relief to tens of millions of families across the country, help close the racial wealth gap, and set our nation on a path to a long term equitable recovery. He can and must use this authority.

Q&A
JODI REED, WWLP: Does cancelling up to $50,000, does that further the advantages of folks who maybe went to more expensive schools, more prestigious schools, maybe have those jobs that are higher wage earners?

SEN. WARREN: …One of the problems we have right now with student loan debt, it’s affected so many people across such a range that people like La’Kayla may have $27,000 worth of student loan debt, but that is enough to keep you from buying a home, maybe enough to keep you from starting a small business. It may be enough to ruin your credit, enough to hold people back. So, when we looked at all the numbers around student loan debt, what we discovered is that what $50,000 will do is it will help close the racial wealth gap and it will free up many of those who were not able to graduate from college from having any debt so that they are free and clear. And then for those who have even more debt, it puts them ahead so they’ll be able to pay it down…

REP. PRESSLEY: I would just like to add, again, we do a disservice when we perpetuate the idea that the face of student debt are white graduate students who went to Ivy League institutions. In fact, this is not just a millennial or Gen Z issue.

The fastest growing population of those who owe student debt are 50+. In my district, as I have travelled it seeking to actively hear their stories and better understand how to address this nearly $2 trillion crisis, I want you to know that I have had people as old as 76 years old who told me they are still paying student debt. And that doesn’t even include the educators, some of which, more generally Attorney General Healey was speaking about, who have lost their licensure to teach because they defaulted on loans – loans they took on because they wanted to be of service to their community.

And let us not forget that under the prior administration, during this pandemic until we intervened, 54,000 people had wages and benefits garnished because of defaulted student loans. So I hope those enumerated examples there make plain that this is, the hurt is deep and it is wide, and again it is an economic justice issue, it is a racial justice issue, and I’ll pick up on the words of our good Senator there, it is a generational issue. But please know that this is not just a millennial or Gen Z issue and we do a disservice to the issue when we define it simply by the institutions they went to, because that also leaves out those that have been adversely impacted by the predatory business practices and deceptive marketing of for-profit colleges and universities.

MICHAEL MACKLIN, WBZ RADIO: How did you get to the $50,000 figure? There have been different figures thrown around on this issue. I just want to know how you landed there.

SEN. WARREN: So, we looked at the data. And it’s how much people owe, how long they’ve owed it, how old they are. And what we discovered is that $10,000 is just not enough help for enough people. That $50,000 helped us reach the point where we could cancel all debt for about 85% of those carrying student loan debt and help close the racial wealth gap the most. So, it’s a place where it’s a substantial amount of debt relief and works best for being able to help the maximum number of people get back on their feet.

LISA KASHINSKY, BOSTON HERALD: There was a report on Politico this morning actually that the President has asked his Education Secretary to create a memo looking into the legal authority to forgive loans or cancel the loan debt. Wanted to get your reaction to that and what steps need to happen beyond this?

REP. PRESSLEY: First, it is my understanding that the last amount President Biden had proposed was $10,000.

LISA KASHINSKY: Do you think he’ll now look into $50,000 according to this report?

REP. PRESSLEY: Well that’s great because in all the conversations that I’ve been a part of with impacted people, they see that $10,000 is not even interest. Congress gave President Biden the authority through the Higher Education Act to cancel debt. And so while we have introduced resolutions and legislation to get at this, why should the American people continue to struggle under the weight of this and wait for a legislative process when President Biden with a stroke of a pen by executive action, authority given to him through the Higher Education Act can immediately mitigate this hurt.

And again this is critical to adjust robust and equitable recovery from this pandemic, this is the moment. This does jump start the economy. It’s about the recovery, it’s economic justice, it’s racial justice, it’s generational justice and these goals are all consistent with the things that had been verbally expressed by this administration that they want to do. You know, I’m in ongoing communication with the White House and I’m grateful that those lines of communications remain open.

I’ve been encouraged by those conversations but I told them listen, if you’re going to speak to the role that Black women had played on the ballot and at the ballot box, Black women are the most educated and the most burdened by student debt, so you can say the words of appreciation. Policy is my love language. Cancel student debt. So he has the authority and moreover the mandate, a decisive mandate from the diverse coalition that elected him.

Over Half of Haiti Population Could Face Severe Hunger by Next Month, U.N. Warns BOSTON – This week, Congresswoman Ayanna Pressley (MA-07), along with Representatives...
Read more
Boston