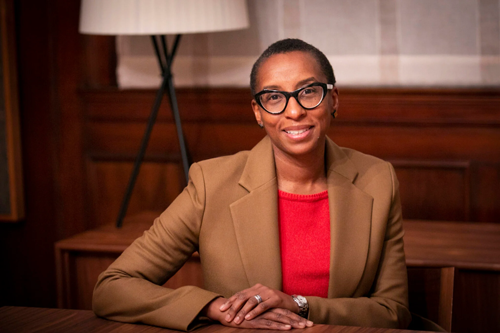 Since 2018, Gay has served as the Edgerley Family Dean of Harvard’s Faculty of Arts and Sciences (FAS), the University’s largest and most academically diverse faculty, spanning the biological and physical sciences and engineering, the social sciences, and the humanities and arts.

As dean, she has guided efforts to expand student access and opportunity, spur excellence and innovation in teaching and research, enhance aspects of academic culture, and bring new emphasis and energy to areas such as quantum science and engineering; climate change; ethnicity, indigeneity, and migration; and the humanities. She has successfully led FAS through the COVID pandemic, consistently and effectively prioritizing the dual goals of safeguarding community health and sustaining academic continuity and progress. The disruptive effects of the crisis notwithstanding, she has also launched and led an ambitious, inclusive, and faculty-driven strategic planning process, intended to take a fresh look at fundamental aspects of academic structures, resources, and operations in FAS and to advance academic excellence in the years ahead.

The daughter of Haitian immigrants, Gay received her bachelor’s degree in 1992 from Stanford, where she majored in economics and was awarded the Anna Laura Myers Prize for best undergraduate thesis. In 1998, she received her Ph.D. in government from Harvard, where she won the Toppan Prize for best dissertation in political science. A quantitative social scientist with expertise in political behavior, Gay served as an assistant professor and then tenured associate professor at Stanford before being recruited to Harvard in 2006 as a professor of government. She was also appointed a professor of African and African American Studies in 2007. She was named the Wilbur A. Cowett Professor of Government in 2015, when she also became dean of social science at FAS.

“Claudine is a remarkable leader who is profoundly devoted to sustaining and enhancing Harvard’s academic excellence, to championing both the value and the values of higher education and research, to expanding opportunity, and to strengthening Harvard as a fount of ideas and a force for good in the world,” said Penny Pritzker, senior fellow of the Harvard Corporation and chair of Harvard’s presidential search committee. “As the Edgerley Family Dean of the Faculty of Arts and Sciences since 2018, and previously as dean of social science, Claudine has brought to her roles a rare blend of incisiveness and inclusiveness, intellectual range and strategic savvy, institutional ambition and personal humility, a respect for enduring ideals, and a talent for catalyzing change. She has a bedrock commitment to free inquiry and expression, as well as a deep appreciation for the diverse voices and views that are the lifeblood of a university community.

“As her many admirers know, Claudine consults widely; she listens attentively; she thinks rigorously and imaginatively; she invites collaboration and resists complacency; and she acts with conviction and purpose,” continued Pritzker. “All of us on the search committee are excited by the prospect of her bringing her high aspirations and interdisciplinary outlook across the Yard from University Hall to Massachusetts Hall. We are confident Claudine will be a thoughtful, principled, and inspiring president for all of Harvard, dedicated to helping each of our individual Schools to thrive, as well as fostering creative connections among them. She is someone intent on affirming the power of curiosity-driven learning. And she is someone eager to integrate and elevate Harvard’s efforts — throughout the arts and sciences and across the professions — to address complex challenges in the wider world.

“For all her professional accomplishments, even more impressive are Claudine’s personal qualities — her quality and clarity of mind, her broad curiosity about fields beyond her own, her integrity and fair-mindedness, and her dedication to creating opportunities for others. She will be a great Harvard president in no small part because she is such a good person,” said Pritzker.