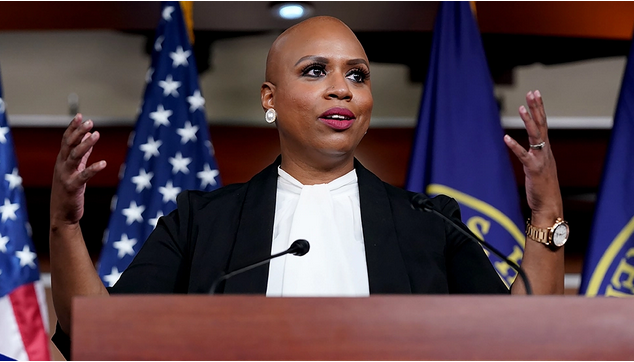 Said the Members, “Today we called on the President to appoint a new Special Envoy to Haiti, a crucial position that has been unfilled for nearly a year. American policy towards Haiti must be rooted in fair treatment, justice, and partnership. While we are glad that the administration has restarted the Haitian Family Reunification Parole Program, changes still need to be made to protect the health, safety, human rights, and dignity of Haitian families in Haiti and here at home.”

Dear Mr. President,
We are gravely concerned regarding the deteriorating conditions in the Republic of Haiti. A year after the July 2021 assassination of President Jovenel Moïse, the country lacks a democratically elected government, insecurity due to gangs and the illegal flow of weapons has increased, and a chaotic situation on the ground is undeniable.

On August 6, 2022, White House Press Secretary Karine Jean-Pierre addressed the worsening situation in Haiti, stating, “it is a complicated situation.” Jean-Pierre further elaborated, “there is no great answer except that we have to do everything that we can to help the people of Haiti.” While we know Haiti’s well-being is of great concern to your administration, we are also troubled by diminished diplomatic resources being committed to the country.

The position of Special Envoy to Haiti was created following the assassination of President Moïse in July 2021. However, following the resignation of Ambassador Daniel Foote in September 2021, a successor has yet to be appointed. The lack of this critical touchpoint in the administration has undoubtedly undermined the administration’s efforts to support the Haitian people and Haiti’s democratic institutions.

The mission of the Special Envoy is to engage with Haitian and international partners to facilitate long-term peace and stability and support efforts to hold free, fair, inclusive, and transparent presidential and legislative elections. The Special Envoy will also work with partners to coordinate assistance efforts in several areas, including humanitarian, security, and investigative assistance. Additionally, the Special Envoy will engage stakeholders in civil society and the private sector as we support Haitian-led solutions to the many pressing challenges facing Haiti.

Mr. President, it is with utmost urgency that we ask you to appoint a new Special Envoy to the Republic of Haiti to continue to ensure that U.S. foreign policy supports a Haitian-led transition to democracy.

Thank you for your attention to this matter.

Background:
As a founding co-chair of the House Haiti Caucus, Rep. Pressley has been an outspoken critic of the Title 42 policy, which has been weaponized to deny migrants—including Haitian and other Black migrants—their legal right to claim asylum in the United States.

In May 2022, Rep. Pressley and Reverend Dieufort Fleurissaint, chair of Haitian Americans United, published an op-ed in The Bay State Banner in which they called on the Biden administration to withdraw support for de facto ruler of Haiti, Ariel Henry, and instead support an inclusive, civil society-led process to restore stability and democracy on the island.

In February, Reps. Pressley, Judy Chu (CA-27), and Nydia Velázquez (NY-07) led 33 other House Democrats on a letter to CDC Director Walensky demanding answers about the agency’s justification for treating asylum seekers as a unique public health threat, how these expulsions are being coordinated, how asylum seekers being returned to dangerous situations are being cared for, and more. Days later, Rep. Pressley once again called on the Biden Administration to reverse the Title 42 Order and other anti-Black immigration policies.

Rep. Pressley has consistently called on the Department of Homeland Security to end the practice of expelling migrants under Title 42 and to employ alternative forms of humanitarian relief for detainees subject to deportation for the remainder of the pandemic.

In September, Rep. Pressley and Rep. Velázquez led 54 of their colleagues on a letter calling on the Biden Administration to immediately halt deportations to Haiti and provide humanitarian parole protections for those seeking asylum. The lawmakers’ letter followed the Administration’s resumption of deportation flights to Haiti as thousands of Haitian migrants continue to await an opportunity to make an asylum claim at the border.

Rep. Pressley joined her colleagues on the House Oversight Committee in demanding answers regarding the inhumane treatment of migrants in Del Rio, Texas, by Border Patrol agents on horseback and pushing to Biden Administration to end the ongoing use and weaponization of Title 42.

Important to Stay Up to Date on Vaccinations Ahead of Fall and Winter BOSTON – September 23, 2022 –The Boston Public Health Commission (BPHC) today...
Read more