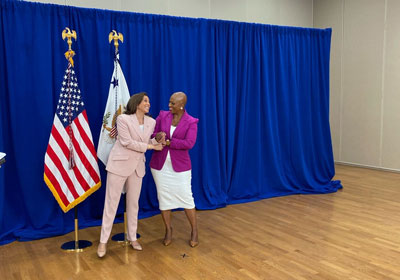 WASHINGTON – Today, Congresswoman Ayanna Pressley (MA-07) joined Vice President Kamala Harris at the IBEW Local 103 in Dorchester for a roundtable with Massachusetts state legislators and local leaders to discuss the fight to protect reproductive rights. Prior to the roundtable, Rep. Pressley greeted the Vice President at Boston Logan International Airport.

“It was an honor to welcome Vice President Harris to Dorchester today as we work to address the coordinated attacks on our bodily autonomy and reproductive justice,” said Rep. Pressley.

“In light of the recent egregious decision from the Supreme Court, I am grateful Massachusetts has moved with urgency to codify and protect abortion care right here at home. As my friend and partner in the work to advance equity, I know Vice President Harris shares our urgency and conviction, and I am grateful to our siblings in the labor movement, IBEW 103, for hosting today’s conversation as we navigate consequential times as a nation and as a community.”

Congresswoman Pressley has been a leading advocate for abortion access throughout her time in public life, and serves as Chair of the Pro-Choice Caucus’s Abortion Rights and Access Task Force.

Rep. Pressley is a lead co-sponsor of the Women’s Health Protection Act (WHPA), bicameral federal legislation to guarantee equal access to abortion care, everywhere. Last month, shortly before the Supreme Court’s overturning of Roe v. Wade, Rep. Pressley led a group of her Black women colleagues in writing to President Biden urging him to declare a public health emergency amid the unprecedented threats to abortion rights nationwide. She condemned the Supreme Court decision and called on the President to use every executive tool available to protect abortion access.

In her time serving in Congress, Congresswoman Pressley has fought persistently to protect fundamental reproductive and sexual health care rights.

In September 2021, Rep. Pressley issued a statement condemning the Supreme Court’s inaction on SB-8, Texas’ restrictive abortion law. Later that month, she participated in a House Oversight Committee hearing to examine the threat posed by abortion bans and underscored the urgency of the Senate passing the Women’s Health Protection Act.
In April 2021, Rep. Pressley, along with Congresswomen Barbara Lee (CA-13), Diana DeGette (CO-01) and Jan Schakowsky (IL-09), led a group of 131 Democratic members in reintroducing the Equal Access to Abortion Coverage in Health Insurance Act or the EACH Act, which would repeal the Hyde Amendment and ensure that all people, regardless of income, insurance or zip code, can make personal reproductive health care decisions without interference from politicians.

As Chair of the Pro-Choice Caucus’s Abortion Rights and Access Task Force, Congresswoman Pressley has led the fight to repeal the Hyde Amendments from annual Labor, Health and Human Services, Education and Related Agencies appropriations bills and in July 2020 published a Medium post on the importance of doing so. The amendment was
In May 2020, she led more than 155 Members of Congress in calling on House Democratic leadership to ensure that any future COVID-19 relief packages rejected Republican efforts to use the public health crisis to diminish abortion access.

In May 2019, she led more than 100 colleagues in introducing H.Con.Res.40, a resolution reaffirming the House of Representative’s support for Roe v. Wade.
In June 2019, Rep. Pressley introduced H.R. 3296, the Affordability is Access Act, to make oral contraception available without a prescription.

In September 2016, as a member of the Boston City Council, Pressley championed a resolution calling on Congress and President Obama to repeal the Hyde Amendment and reinstate insurance coverage for abortion services

Over Half of Haiti Population Could Face Severe Hunger by Next Month, U.N. Warns BOSTON – This week, Congresswoman Ayanna Pressley (MA-07), along with Representatives...
Read more